(Known as "Alien Tripods") The Tripodisians are the main antagonists of Steven Spielberg's 2005 movie, called "War of The Worlds".

The Tripodis Fighting Machines has two windshields that are on both sides of the dome-like head, a dozen or more tentacles that can be retracted, two heat rays, bendable legs which connect to the wrist or ankles of the tripod that have three fingers or toes, and three headlights on the front, with one massive headlight. In the movie itself, there has shown to be three different types of tripods, one of which lacks tentacles and instead only has heat rays, while the other has their tentacles deployed and visible cages on the under-behind of their hood, but with the third model shown later in the film as it has Four headlights along with the central massive headlight leading to the design of it more Heavy-duty as it used both tentacles and heat-rays. For each tentacle, it has at least one camera probe.Their horn is a deep-foghorn noise to the "ULLA", similar to the "ALOO!" of the book. Like the other adaptations, this tripod has an energy shield. It possessed two sprayers on its sides, which fertilize the surrounding area with red weed. Their walk was inspired by the red-eyed tree fog when it walks. also they can have smaller handeler machines from the great [REDACTED] war

The Tripodisians have two minute arms hanging to their chest, two long, skinny arms with three fingers on each hand, and one leg. The heads are shaped in triangles, which resembles their Tripods. Their eyes are black, and they have two sets of sharp teeth. They also appear to be highly intelligent.

On January 4, 2154. The all stormy after the arrival of the Tripodisians due to the storm that brought them here in the first place. The invasion started while Tripodisians killing humans. 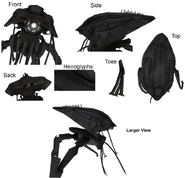 Low poly of Tripodisian in GMoD

The Tripodisian Creature, which is also a human-size

Some of the 9+ Tripod designs

The Tripodisians are also in surface and their homeworld planet is Tripodis, which is made by EvanVizuett and published in DeviantArt on May 17, 2020

another type of tripodisians. duotripodians
Add a photo to this gallery
Retrieved from "https://trevor-henderson-inspiration.fandom.com/wiki/Tripodisian?oldid=72455"
Community content is available under CC-BY-SA unless otherwise noted.