God Of Roadkill is a creature made by Trevor Henderson it’s grotesque and strange.

Estimated to be the size of a van or bigger, this very grotesque-looking being has a bird-like head with what looks to be a pointy beak and four eyes that look drawn. Its body appears to have the same proportions as a bird of unknown species, it doesn't have any legs, however. The body is separated from the pelvis, the whereabouts of its lower half are currently unknown. It looks to have had its skin torn off, leaving bones and remnants of flesh, likely from a car Crash

In the photo, it seems to be in a pose that would suggest that it has to use its arms and hands to crawl across roads, fields, etc. In a sketch of The God Of Roadkill, it looks as if there are stitches from its "head" to its neck which may suggest that its head is a mask. This might explain why its eyes look almost drawn on.

The true purpose of it existing is currently mostly unknown. All we know is that after somebody encounters it while driving they crash soon after, it could be targeting people who have run over animals while driving in the road. 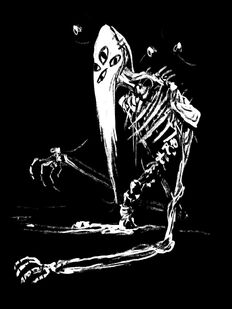 White and black image of God Of Roadkill
Add a photo to this gallery
Retrieved from "https://trevor-henderson-inspiration.fandom.com/wiki/God_Of_Roadkill?oldid=73192"
Community content is available under CC-BY-SA unless otherwise noted.