The Bridge Worm is a creature created by Trevor Henderson on August 14, 2019.

The Bridge Worm is a long scary-like entity that is known for hiding under long interstate highway bridges. However, it has been found to hide under small bridges, supposedly using a safe house tactic to travel long distances without being spotted (However this claim has no evidence of being true). The entities' arms are long, at a recorded distance of 9 feet. It has bone-like fingers, similar to humans but is far more flexible. It has two sets, one at the back and one at the front. It can be female.

The real species name is a "Sweaveryer" but most call them a Bridge Worm. It is named Weaveryer because in the name itself it sounds like it could sliver and wiggle around and bounce like how they move.

It uses a flap of flesh to trick prey (humans and small animals, but seen to prey on deer and ox) which has a fake 'face' that has small, black, tiny slits for it's 'eyes' and a small, but neutral facial expression 'mouth', which makes it approachable. Underneath the flap, it reveals a horrific grin on its face with 36 human-like teeth. The nose is similar to a human's underneath the skin, proving the fact that the flap is its skin. The tissue on The Bridge Worm's 'real face' is cellular near-identical to humans, but has some flaws. The eyes of The Bridge Worms are extremely misaligned and disorienting as they bounce around while running. Usually, this flap goes up when chasing someone (presumably due to the wind of running 25 kph but there is evidence that proves otherwise). It eats its prey, usually by crushing the preys' skull and spine before ripping said prey in half and is licked up with its tongue. It has a running speed at approximately 25 kilometers per hour, and it has incredible endurance and lengths traveled while running has reached over 125 kilometers before resting/giving up on prey. Safe distances from The Bridge Worm range from 30 to 50 feet depending on how hungry it is. Recommended distances are 40 to 50 feet away from the Bridge Worm.

"Whether or not The Bridge Worm can be captured and/or terminated is unknown. Best to stay away from what you cannot recognize rather than approach the depths of the mysterious."

"The bridge worm will sometimes venture far from its nest if the prey is hard to come by, instinctually hunting at night and in abandoned areas to avoid discovery. The photo below: The adolescent bridge worm folds back its false face as it prepares to feed. RIP Photographer Tomas Piercing, missing and presumed dead. The scientific community thanks you for your service."and to be exact, these animals are VERY real. 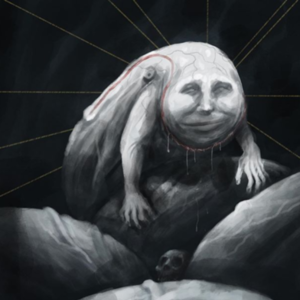 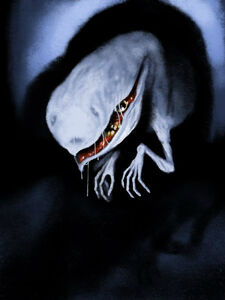 A bridge worm emerging from a tunnel 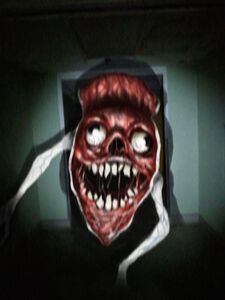 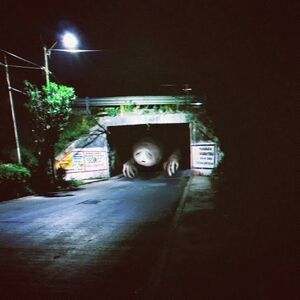 A young Bridge Worm hiding under a bridge. 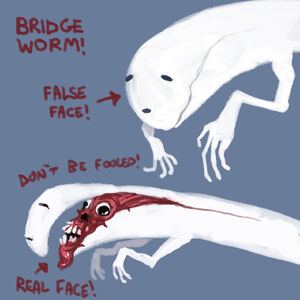 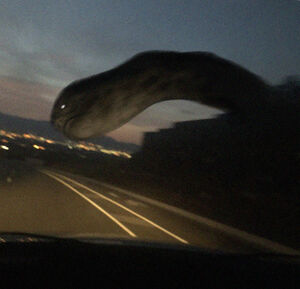 The Highway Worm
Add a photo to this gallery

Fan Made Images made by Fellow Wiki Members! 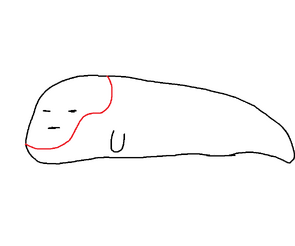 A image of Bridge Worm, made by Scott9196 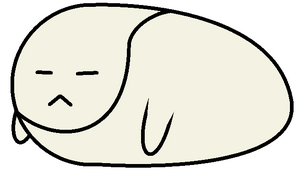 A chibi version of Bridge Worm, made by EvanVizuett 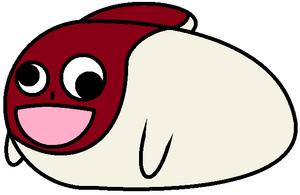 A chibi version of Bridge Worm, but with it's face opened, made by EvanVizuett 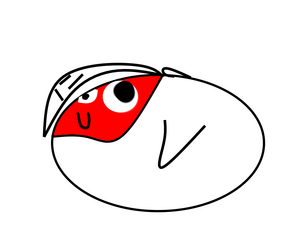 Bridge Worm Attacks in a Forest

Bridge Worm
Add a photo to this gallery
Retrieved from "https://trevor-henderson-inspiration.fandom.com/wiki/Bridge_Worm?oldid=141730"
Community content is available under CC-BY-SA unless otherwise noted.