Breaking News is a tall, humanoid, mysterious creature that sometimes lives in small European cities from sunset to midnight. He is in a group of mysterious humanoids, known as the "Giants", which are characterized by mysterious phenomena, a hostile nature, and, as huge scientists say, they once caught a creature in the cell and even got scared. Dr. Solars, the scientist, said: "We just did our job until we saw it." A year later, Dr. Solars was never seen again .

Although no one that has made physical contact that is still alive, Breaking News' "skin" appears to be made of VantaBlack, a material that absorbs 99.965% of all light that hits it. It is unknown how this is possible, as Vanta-Black is a man-made substance, but it is the only explanation, as all attempts to put light onto Breaking News to see what it looks like results in pure darkness. The creature itself has a rather flimsy neck, as in all photos taken of it, its head is either hanging down or to the side. It is unknown if it has eyes, a nose, or even a mouth or ears, as if they exist, they are Vanta-Black as well. But it does have one giant hole in its face, used as a sort of mouth. Its torso is normal for that of a human, but it's arms are unusually long and gangly. Both parts of its arm are about the height of a 2-story building. It is unknown why the legs aren't just as long, but they are still impressively big compared to that of a human's. It appears to always be slightly bent down. Breaking News has been known to let out an ear-deafening screech similar to that of an emergency alert system, hence the nickname, "Breaking News".

Breaking News is a beast of destruction. it is known to walk straight through any building like it isn't even there. Houses broken by Breaking News are often non-repairable and it leaves entire cities abandoned. Breaking News is a very dangerous creature, as it kills all things within 15 miles of it.. It feeds by shoveling food into the giant hole in its face. Breaking News is nicknamed after it's ability to distort every piece of technology within 10000 meters. When in interference range, any piece of technology will blare the emergency alert system sound, even if unplugged. If it has a screen, it will show the emergency alert system as well. This shows that Breaking News is utilizing electricity in some way. It is unknown how, though. 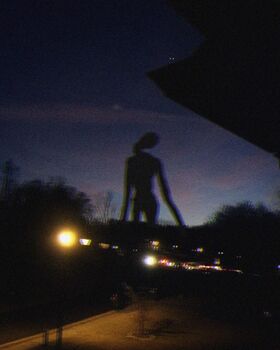 A sighting image of Breaking News starting to found a cops.
Add a photo to this gallery

Retrieved from "https://trevor-henderson-inspiration.fandom.com/wiki/Breaking_News?oldid=143435"
Community content is available under CC-BY-SA unless otherwise noted.