Anxious Dog is a creature created by Trevor Henderson. Information is scarce about this one, at most.

Anxious Dog is a creature that is albino in color and doesn't seem to have any eyes, with rather human-like teeth. The creature's lips also seem like that of humans, although with exaggerated color. The creature's lower body hasn't been seen in any of the photos taken of it, but one could assume that the lower body is just as thin and malnourished as the upper body. Its arms are long, seemingly as tall as a person, while its hands and nails remain human-like.

In one of the first-ever images of Anxious Dog, the caption reads "toenails clicking in the hallway like an anxious dog" explaining its name and hinting that when it moves, its toenails rapidly come in contact with the ground; making it seem as if it were an anxious dog. In recent photos, it seems that the creature has more than appendages on its lower body. Henderson hasn't hinted at what might be the nature of the creature: Doing harm or being harmless? 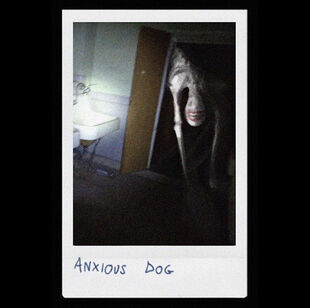 Anxious Dog's Polaroid
Add a photo to this gallery
Retrieved from "https://trevor-henderson-inspiration.fandom.com/wiki/Anxious_Dog?oldid=142289"
Community content is available under CC-BY-SA unless otherwise noted.